This limited edition pin set is available as part of the deluxe edition release of Snow White and the Seven Dwarfs on Blu-ray. Other than the pins, the set also includes an art book (not to be confused with the book included in the "Collector's Book Set"), the Blu-ray itself, and eight lithographs of production sketches in a large, collectible box. The pins are presented in a red velvet box. Seven of the pins, one for each of the dwarfs, are set against a background of the log they march over during the Heigh-Ho sequence, while the eighth pin, replicating the art on the cover of the book, is included to the right of the scene on a standalone purple background. ***BEWARE*** A member reports seeing numerous scrapper versions of the dwarf pins, but not the logo pin, on lanyards at WDW. PLEASE be careful when trading for this set, or buying it on the secondary market. Try and consider the box and illustration a "certificate of authenticity", as it were, la #2939. RELEASED: OCTOBER 2009 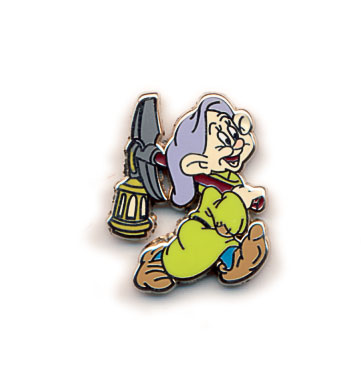