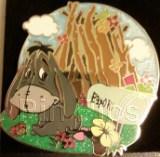 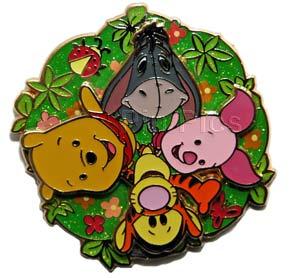 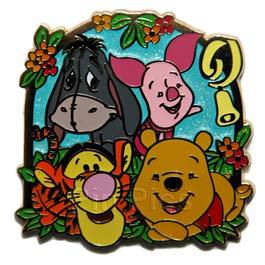 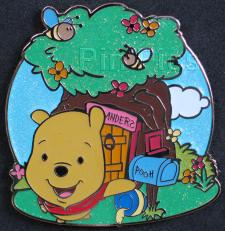 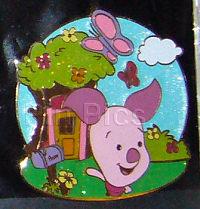 1. Eeyore With Mailbox "Eeyore is sitting in a green glitter field with flowers, in front of a tree trunk watching his mailbox with the flag up."

2. Spinner "Winnie the Pooh, Eeyore, Piglet and Tigger stand with smiles on the ground in a circle and look straight up. The characters are a pin on pin spinner. The background includes light and dark pink, brown, and lavender flowers; green leaves around the edge; two ladybugs; and a butterfly. The green base and the center of the character pin are glittery.

4. Pooh With Mailbox "Winnie the Pooh stands with his left arm raised in front of a tree that has a closed door and a red window with a flower box. Above the door is "Anders" (for Mr. Sanders). On Pooh's left is a blue mailbox on a wooden stake; his name is on the mailbox. Below the mailbox is a tipped over blue and yellow hunny/honey jar. In the tree leaves are flowers and bees. The tree leaves, light blue background, grass and bush next to the tree are glittery.

5. On Bridge "Winnie the Pooh stands with his left arm raised on a wooden bridge (in the 100 Acre Wood). Tigger lays in the grass on his stomach at the end of the bridge in front of Pooh. Rabbit is next to Tigger and holds a pot with a sign reading "Carrot" and a small growing carrot. Piglet sits on the bridge railing slightly behind Pooh and on his right. Eeyore sits behind Pooh in the middle of the bridge. Owl is in the trees above the bridge. A small acrylic inset at the lower right of the pin represents the river/water flowing under the bridge. The tree leaves, light blue background, and grass are glittery. White clouds are in the sky.

6. Piglet With Mailbox "Piglet stands with his right arm raised in front of a tree that has a closed door with pink trim. He is pointing at a light purple mailbox on a wooden stake; his name is on the mailbox, and the red flag is raised. There is a yellow flower at the base of the mailbox. Above Piglet are two butterflies and a bush. There are flowers in the bush and in the leaves of the tree. A white cloud floats in the sky. The tree leaves, light blue background, grass and bush are glittery.

DISCLAIMER FOR MARK AND RITA